UROCK Theatre is an innovative and experimental company with many years’ experience in giving young people the freedom to contribute and make decisions about the content and process of making theatre. UROCK’s dominant style encompasses physicality, improvisation and script work. The students are encouraged to become leaders and achieve excellence through exploring all aspects of the creative industries.

UROCK’s production of Dungeness is bursting with life and energy. It’s full of moments of humour and pathos and the company have really embraced the heart of the piece. The simple, stripped back production puts acting and character centre stage and the actors have clearly engaged with the challenges of a one-room, one scene play. Chatting to the company after the show I was really impressed with how much they’d engaged in the challenges of the play.
There are some really emotionally intelligent and well observed performances in your production. The actors have clearly thought a lot about their characters and the journeys that they take through the play.

Date of Performance 06/04/18 Play Want by Barney Norris
UROCK Creative is a second company led by experienced associate Director, Lee Griffen, and has enabled the group to programme a double bill entry to Connections 2018. UROCK Creative is a mixture of regular, more experienced company members, some of whom have done the festival before, and fresh new recruits. Talking to the company after the show it’s clear that they’ve bonded as a group and the more experienced cast members have been supporting the newer cast members. The cast have really responded to the challenge of tackling a naturalistic play.

UROCK Creative’s production of Want is a focused, naturalistic realisation of the play that puts detailed acting at the core of the piece. The company put specific and textured character work up against moments of stylised movement and dance to create a thrilling stage language for their production.
The company have found a really strong physical language for the piece. It sits up against the naturalistic acting at the core of the play and creates something really quite beautiful to watch. When we spoke after the show it was clear that you’re excited by a physical approach to theatre making and that has informed a lot of the process. I was also happy to hear, in the post-show chat, that one of the cast had taken over choreographing some of the movement sections herself.

By Kellie Smith
Synopsis
In a cold village on the edge of nowhere, a disease has broken out, infecting the young and transforming them into monstrous creatures. The villagers fearfully watch their children for symptoms of the disease, whilst the Mayor has adopted tough measures for dealing with those who are infected. When Bolek, the local scholar, makes a breakthrough in finding a cure, few are prepared for the gruesome nature of the treatment. But with his own daughter showing signs of infection, there is no choice than to stop this terrible disease dead in its tracks.

A gothic melodrama about the terrifying onset of adolescence. 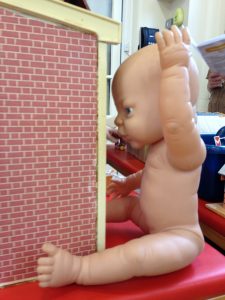 UROCK Company perform Gargantua by Carl Grose as part of National Theatre Connections – a nationwide celebration of new plays for young people.
When Mr. and Mrs. Mungus have a baby it isn’t the bouncing blue-eyed boy they were hoping for. After a two-and-a-half year pregnancy, Mini Mungus gives birth to a monster – one with an accelerated growth rate and an insatiable appetite for anything that moves (including joggers). But when sinister military scientists become intent on cloning an army of giant babies from the giant, he breaks his chains and escapes. The world can only watch in horror as he embarks on learning how to walk and rampant destruction. Who will stop this freak of nature? Who will decide his tragic fate? And who, more importantly, will change his nappy?
www.urock.org.uk
NT Connections is produced by the National Theatre and supported by a number of individuals, trusts and foundations. Connections plays are commissioned for and about young people from some of the best contemporary playwrights, for performance by schools and youth theatres all over the UK and Ireland, making Connections one of the world’s largest celebrations of youth theatre.
connections.nationaltheatre.org.uk

UROCK take Remote by Stef Smith to the National Theatre 2015
The innovative and experimental youth theatre company UROCK, which draws young people from across Peterborough, have won the ultimate accolade for the second time in three years in the National Theatre Connections 2015 Festival of new writing.
Only one performance of each title is invited to perform, and UROCK was chosen to perform REMOTE by writer Stef Smith on Saturday July 4th AT 7PM in the Dorfman Theatre, National Theatre, Southbank.

Performed at The National Theatre

Artistic Director Diane Goldsmith commented “This is a massive endorsement of the way the company allows every individual to flourish. My colleague Tom Fox is a highly talented director with a special future. I hope everyone associated with creative output in Peterborough will recognise this achievement, and follow our journey through to the performance in London.”

Director Tom Fox said: “this is a testament to the company’s hard work. From picking the play in early September last year, to performing it in London in July, everyone has really immersed themselves into every part of the process. This has made a phenomenally tight team of multi-skilled performers. This strength is key to UROCK and its ethos. We are all ecstatic at the prospect of performing at the National Theatre again, especially with a play that we loved exploring.

National Theatre Connections 2014 begins with Letter to Lacey.
“Are you happy now you made me hurt you?’
Kara sits down to write an email to someone she’s never met: her ex-boyfriend’s new girlfriend. Reece was the love of her life and as Kara spills her heart out, we learn just what it took to be with him – from their first meeting in the local park to their final showdown in the hospital. This play with music, explores partner abuse and how it affects not just the couple involved, but their friends and family as well. After UROCK’s National Theatre success last year, we introduce Matt Rowell, a new young director working with the Company to present this years production. An important story that should be shared and discussed with all, by the writer of Mamma Mia, Catherine Johnson. Please note the play contains some strong language.

Ailie and the Alien by Morna Pearson 2013

‘Ailie is a human and things have been going wrong for her for a while now. Finn is an alien who has crash landed on earth. When Finn takes a shine to Ailie things suddenly start going right in her life. But when Finn is summoned to return home everything begins to unravel.’

Directed by Tom Fox and performed by talented students from many of the secondary schools in the wider Peterborough area, the company enjoyed exploring such a moving and funny play, rehearsing  long and hard.  All the hard work paid off, as  UROCK Youth Company was announced as one of the companies chosen to perform at the National Theatre in London in July 2013. They had been taking part in the NT Connections program for three years and out of 220 youth companies around the country, they were one of only 10 companies chosen in 2013.

The play is part of the National Theatre Connections program. The concept of National Theatre Connections is simple — exciting new plays, commissioned by the National Theatre and performed by youth theatre groups across the UK, with professional support from the NT and its partner theatres. In 2013, 10 plays were written and a number of companies performed their chosen play in their home towns or cities, but only one from each play was chosen to go to London. Out of around 30 other groups who selected the same play, UROCK were chosen to perform Ailie and the Alien.